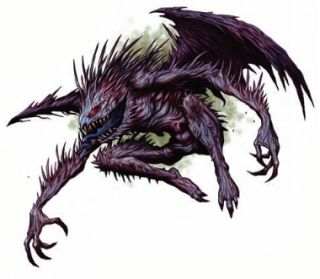 Note: Their favored weapon is usually something along the lines of a Military Fork (Speed 7, d8/2d4)


Ed's Notes: I've always felt that these guys would make cool Familiars for high level, Lawful Evil Wizards. 😈 Lol. Spinagons are generally as scouts and messengers. Given the picture above, used because Tony DiTerlizzi's art for both the Spinagon and the Abishai was uncharacteristically lacking, one could just imagine a chamber in Bel's fortress or Dispater's Tower just crawling with them. That would terrifying, even for so lowly a creature.

Unless otherwise noted, Special Abilities can be used once per round.
Posted by Niceguy Eddie at 3:03 PM