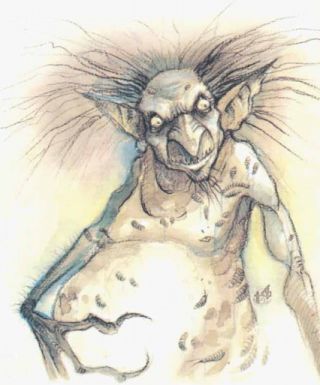 Note: When formed into legions, they will sometimes be armed with Maces (Speed: 7, d6/d6) but they quickly forget how to use them and resort to fight tooth-and-nail.

Ed's Notes: Not actual Tanar'ri, the Manes are the Chaotic Evil petitioners of the Abyss. Little more than vermin and cannon fodder for the Blood War. PC's should be wary about fighting a large number. They're not Orcs. A large number can blanket the battlefield in Darkness to start and Poisonous Vapor as the battle rages on. And many Spells won't work on them. So even the most wretched among the Tanar'ri can still present a challenge. It doesn't say in the book if Holy Water or Weapons will keep them from re-forming.
Posted by Niceguy Eddie at 2:16 PM