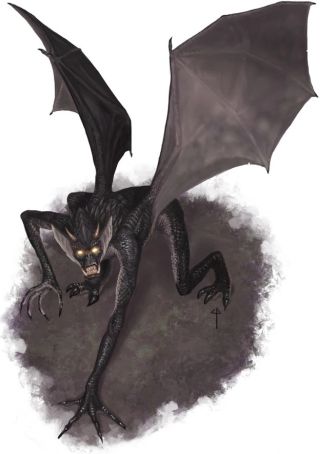 Note: Nabassu may use a variety of weapons, or none. They start out as Fledglings, using the lowest stats and fewest abilities. (AC 4, HD 7.) When they enter another Plane they gain 2 hit points. Each victim killed there grants 1 more hit point and ½ factor of Armor Class. Once they've killed 18 Victims, they are considered Mature. They lose their Fledgling abilities and gain all of the Mature abilities listed above. All Spell like abilities are usable once per round unless otherwise noted.

Ed's Notes: Scourge of humanity indeed. You do not want to accidentally Summon one of these guys. (You know... DEATH GAZE and all.)
Posted by Niceguy Eddie at 4:53 PM