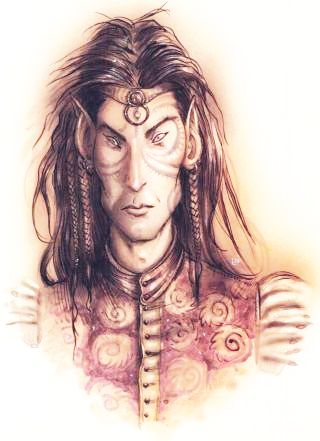 Note: All Spell like abilities are usable once per round unless otherwise noted. They don't carry, use or need weapons, as the can form a fiery blade from their hand that acts as a:

and can assume the secondary form of any other Eladrin at will, keeping their THAC0 and AC, but doing double damage on attacks:

Noviere: Watery Dolphin - Sw 24, 4d8;  On a attack of 19-20, can choose to envelope the target, holding it with a Str of 20. Neither can attack while target is enveloped. A successful Bend Bars/Lift Gate Roll is required to escape.